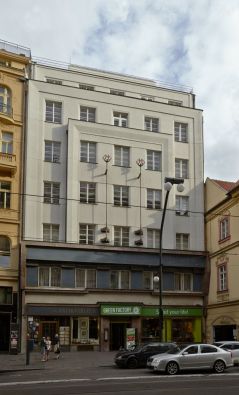 Soon after its creation, the Institute established itself as the foremost centre of primary legal research in then Czechoslovakia. It developed an ambitious research programme whose priorities included areas of law that had been insufficiently examined in the pre-WWII period, in particular public international law and legal history. The Institute also played a prominent role in publishing the important part of the Czechoslovak legal periodicals. In addition to Právník, the oldest Czech law journal, that the Institute edited since the early 1950s, the Institute began publishing three new reviews: Právněhistorické studie (Studies in Legal History); Studie z mezinárodního práva (International Law Studies); and a theoretical journal Stát a právo(State and Law). Furthermore, similar to other constitutent parts of the new Academy of Sciences, the Institute was charged with providing postgraduate education in law and, consequently, was conferred the power to award senior degrees in law.
The creation of the Institute – like of the entire Czechoslovak Academy of Sciences – coincided with the installation of the Communist regime in Czechoslovakia. Jurisprudence and legal research – due to their role – were quickly subjected to the strict ideological control that influenced the Institute´s research, its points of departure, and its conclusions. Gradually, however, with the post-1956 „melt-down,“ more liberal conditions prevailed for legal and politological research. This trend culminated with the 1968 Prague Spring in whose events some of the Institute´s employees took a direct part.
In the 1970s and 1980s, the Institute underwent several reorganizations; these eventually broadened the research areas so that the Institute would be able respond to new challenges in legal theory and practice. Consequently, such disciplines as comparative law, environmental law, or legal informatics and linguistics were incorporated into the Institute´s research schemes. It was also in this period that the Institute started to develop what became the basis for the first electronic database of legal information in Czechoslovakia. The Institute also continued to provide legal expertise for state authorities and then publicly-owned enterprises.
The profound political and social changes that followed the events of November 1989 marked a new era for legal research. The ensuing reform of the Academy of Sciences required the Institute to cope with many uneasy tasks,  from altering its legal status to budgetary cuts. Despite these temporary difficulties, the Institute managed to retain its tradition of legal research and its publishing activities. Therefore, when the Czech Academy of Sciences was created subsequent to the dissolution of the former Czechoslovakia in 1993, it was quite natural to find the Institute of State and Law among its integral parts.